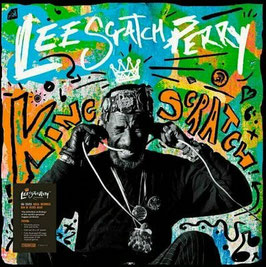 The release, out on double CD, double vinyl and a deluxe box set, comprises tracks from across the career of the legendary late great Jamaican record producer and artist Lee ‘Scratch’ Perry. Released on the 26th August (2nd September in USA & Canada), the collection marks the 1st anniversary of his passing, showcasing the very best of his work across his own releases and his productions for other artists.

As arguably the greatest Jamaican record producer of all time, Lee ‘Scratch’ Perry was instrumental in transforming Jamaica’s national sound throughout the 60s and 70s, with his unique approach to production pushing the music beyond previously perceived boundaries.

The deluxe box set comprises 112 tracks across four vinyl LPs and four CDs, featuring his best known and most influential recordings along with some rare and unreleased DJ mixes.

The 2x gatefold LP and 2x CD set format focuses upon the legendary music-maker’s best-known productions from the 60s and 70s, performed by some of the giants of Jamaican music, with both iconic imagery and extensive notes on the man whose talent and imagination took reggae to new heights of excellence.

Lee ‘Scratch’ Perry’s vision and talent has had a significant impact on the musical landscape of today, inspiring many of the world’s greatest musicians including the likes of The Prodigy, The Rolling Stones, The Beastie Boys, The Clash and Diplo who carried his sound forward. This brand new release pays homage to a legend whose astounding legacy will never be forgotten.